Claire Foy and Paul Bettany have been cast as the Duchess and Duke of Argyll in the forthcoming second season of A Very British Scandal, which will premiere on BBC in the fall.

[2] Previously, Blueprint Pictures had produced A Very English Scandal (2018), a film on the Thorpe incident, for which it received an Oscar nomination. [3] A Very British Scandal, produced and written by Sarah Phelps, debuted on BBC One in the United Kingdom on December 26th, 2021.

A Fresh Writer Is Penning the Scripts For Season 2 “I want a female writer to follow the footsteps of Russell T. Davis, who wrote the first season,” Treadwell-Collins told Digital Spy. “I need a female writer for a feminist controversy,” he stated.

The Plot Focused On Margaret Campbell, the Duchess of Argyll

Before she became the Duchess of Argyll, 19-year-old Margaret Whigham was a Scottish millionaire’s heiress. When she was only 19, Margaret was a debutante who had already been engaged four times and was making her way through the most illustrious social circles. She allegedly had an unlawful abortion when she was 15 years old.

When she was 20 years old, she married Charles Sweeney, an American socialite, and businessman. The Guardian called the viewing of Margaret’s wedding gown “the media event of the decade,” with upwards of 20,000 people turning up to get a glimpse. There were stillbirths and eight miscarriages while raising the couple’s two children. When their marriage crumbled in 1947, they filed for divorce. In the years before his marriage to Margaret, Argyll’s duke Ian Campbell had been married twice previously. As a consequence of his experience as a prisoner of war in Germany, Campbell, who was born in 1903, developed drinking and gambling addictions. His ex-wives allege that he was aggressive against them, both physically and verbally. Inveraray Castle in Scotland was inherited by the Duke in 1949 when he was the head of his clan.

The Duchess of Argyll is Played by Claire Foy

Fans of The Crown who haven’t seen Foy since Season 2 will be eager to check-in. The Emmy-winning actress will portray Margaret in a performance that is sure to get her back into the awards debate next year.. Her spouse, the Duke of Argyll, will be played by Paul Bettany. 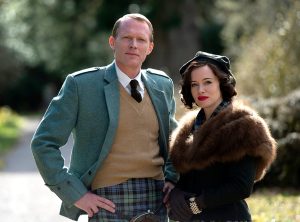 In the 1960s, high-profile sex scandals like the Profumo affair tarnished the reputations of many women. Treating the “highly sexed” Duchess with scorn would be equivalent to “slut shaming” in today’s eyes, which may see her as sexually free.

In the official narrative, “the divorce of the Duke and Duchess of Argyll (Bettany) is one of the most renowned, spectacular, and violent court cases of the twentieth century.” When Margaret, Duchess of Argyll, went through her notorious divorce, it was all due to her charisma, attractiveness, and sense of style, which generated headlines in the 1960s media.