The Lincoln Lawyer season 1 is based on the bestselling novels of Michael Connelly. With Hollywood legend David E. Kelley on board as both the creator and executive producer, there are big hopes for the next series. Kelley has a lengthy history of producing popular legal dramas, as evidenced by his work on Chicago Hope, The Practice, Ally McBeal, and Boston Legal, to mention a few.

Ted Humphrey (The Good Wife) and executive producer Ross Fineman are also working behind the scenes on the show (Big Sky). Despite the show’s star power and the fact that the Matthew McConaughey-led film adaptation of Connelly’s novels was a sleeper hit in 2011, the series has had a long and winding road.

When will season one of The Lincoln Lawyer air?

On Friday, june 13, The Lincoln Lawyer debuted on Netflix in the United States and the United Kingdom. Subscribers will get another chance to binge-watch the 10-episode season.

An episode guide for season 1 may be found below.

“He Rides Again” in Episode 1
“After a personal and professional downfall, Los Angeles defense attorney Mickey Haller is presented with an unexpected opportunity by a colleague.”

The Magic Bullet (Episode 2)
“A high-profile murder trial puts Mickey rushing for evidence for his defense, while Maggie offers him a chance to regain her faith.”

“Momentum,” Episode 3
“Mickey searches for a connection between the Trevor Elliott case and his mysterious new client, Lorna follows up on a clue, and Cisco expresses security worries.”

“Chaos Theory” (episode 4)
“Mickey and Detective Griggs talk things over after a close call in his office. Maggie’s human trafficking witness is reconsidering her statement.”

“Twelve Lemmings in a Box” is the fifth episode of the series.
“Mickey is frustrated by Trevor’s demands during jury selection, so she seeks unconventional assistance. Another person with a motivation is discovered by Cisco.”

“As Mickey tries to track down the source of a possible bribe, he meets with Lara’s former colleague, revisits an old case, and does a favour for Maggie

“Lemming Number Seven” is the title of Episode 7.
“Mickey attempts to claim the police had tunnel vision on the first day of Trevor’s trial. Maggie gets a tip from a new witness. Lorna and Hayley come in.”

“The Magic Bullet Redux” is the title of Episode 8 of the series.
“Mickey looks for one piece of evidence that will blow his case wide open after a bruising day of testifying. On Soto, Maggie is up against a deadline.”

The Brass Verdict (Episode 9)
“As the puzzle pieces fall together, Mickey confronts Trevor, and his chance to make amends for a previous wrong may have fatal ramifications for Maggie.”

The theory behind the Lincoln Lawyer

The Lincoln Lawyer has the following premise, according to Netflix:

“Mickey Haller, an iconoclastic optimist, works out of the back seat of his Lincoln, taking on cases large and small all around Los Angeles. The first season is based on the second book in the Lincoln Lawyer series, The Brass Verdict, by popular author Michael Connelly.”

What will happen in The Lincoln Lawyer season one?

The short answer is “it depends on the book they choose.”

The Lincoln Lawyer, unlike other Netflix book adaptations such as Bridgerton, does not follow a book order pattern for its series.

In fact, they decided to adapt the second book in the collection, The Brass Verdict, instead of the first. Even so, there were changes, with Christopher Gorham’s tech genius and video game entrepreneur replacing the novel’s film producer suspect. 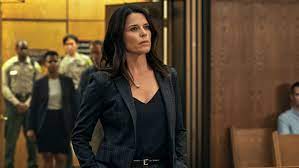 Things are just as complicated in the remaining five books, with Haller being jailed for a murder he must show he did not commit in one of them.

Others have seen him defend a convicted child murderer, a desperate mother whose home has been foreclosed on, and a sex worker Haller had previously attempted to assist in court battles.

Who will star in the first season of The Lincoln Lawyer?

Manuel Garcia-Rulfo will almost certainly reprise his role as Mickey Haller, the title’s lawyer if The Lincoln Lawyer returns.

Izzy Letts, a recovering addict, will be accompanied by Jazz Raycole, who will serve as his right-hand lady and Lincoln vehicle driver. 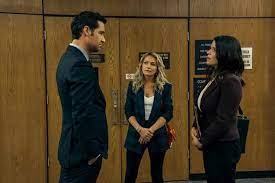 The other cast members, on the other hand, didn’t make it to the end of season one, whether due to arrest or having their lives cut short by external factors.

As a result, there’s plenty of room in the ranks for some newcomers. Especially, whatever the big case for season two could be.
Read More: Four More Shots Please Season 3 – Is This Series Coming in 2022!

Season 1 trailer of The Lincoln Lawyer

One can’t help but think of Boston Legal while watching the trailer for The Lincoln Lawyer season 1. Check it out:

Jeepers Creepers 4 – Did The Show Finally Get Renewed?